A few weeks back one of our readers wrote in to us asking us what type of headlights he should buy for his towing vehicle. He wasn’t sure if he should get xenon headlights, bi-xenon, HID, or LED. We could certainly understand his confusion, as there are indeed many options on the market when it comes to headlight kits and conversions. Let’s take a look at the similarities and differences between xenon and bi-xenon. 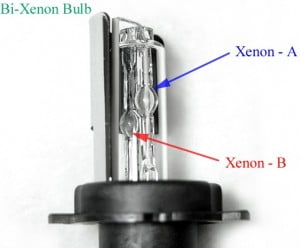 Some Xenon headlights now use a metallic plate which is placed horizontally in front of the bulb, thereby covering the top portion of the headlight, which in turn limits the light to a certain space in the front of the car. When the driver switches to high beams, the light simply lifts the metal plate and allows the entire light to flow out from the bulb.

Going back to our reader who sent us this question, our answer is, it depends. Each vehicle is equipped to handle only certain types of lights. So, without knowing exactly what type of towing vehicle he has, we cannot say definitively. Our recommendation is to look on a car parts website, or even Amazon, and see which type of headlight bulbs or kits will fit his vehicle and go from there. We do know, however, that whichever he does end up going with, it will in all likelihood be a big improvement over his stock factory headlights.